The South Prospect of Reading, in the County of Berks,

a panoramic view of the historic county town, prospering at the heart of the agricultural south, on the confluence of the Thames and its tributary Kennet, later to be linked to Bath and Bristol via the Kennet and Avon canal, from the Bucks’ series, ‘Cities, Sea-Ports and Capital Towns’, first issued from 1728, which eventually ran to some eighty seven such ‘Prospects’ by the middle of the 18th century, along with their over 428 ‘Antiquities’ forming a truly unprecedented visual record of England and Wales, historical and modern,

engraving with hand-colouring, 305 x 800 mm. (12 x 31 1/2 in), some wear and repaired splits on three vertical folds, trimmed above and to the left, shaving the upper left end of the title letters, the sheet linen-backed, 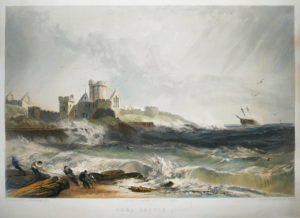