a social satire of a theatrical subject for ‘The Scourge, or Monthly Expositor of Imposture and Folly’, a satirical publication that ran to 9 volumes over 6 years between 1811 and 1815, and included numerous caricature prints, this one depicting controversy around the new Drury Lane theatre that opened in October 1812, and in particular the rebuilding committee under the chairmanship of the politician, Samuel Whitbread II, from the famous brewery family, here depicted atop a ladder leaning against an enormous, steaming, brewing vat, which he stirs while throwing in bundles marked ‘Promises’, ‘Subscriptions’, and ‘Explanations’, set at the centre of a large proscenium arch, the scene further populated with numerous interacting figures, including the playwright/managers, Samuel Arnold and James Raymond, here on all fours supporting the giant vat, Thomas Sheridan and his son, who tap into the vat symbolically to divert thousands of pounds of profit into their tankard and mouth, away from bucket placed by a frustrated John Bull under a tap from which nothing flows, to the right side are the Duke of Norfolk, Lord Byron and actor Robert Elliston, to the left side the elderly banker, William Coutts with a young and comely Harriet Mellon, in a darkly shaded box above is the suggestion of the Prince Regent in a passionate embrace with Lady Hertford, while high above are suspended the central figure of Apollo trying to avoid fumes from the vat beneath him, and to either side the dying figures of Tragedy and Comedy, hanged by the neck,

original hand-coloured etching, 300 x 470 mm. (12 x 18 1/2 in), slight splitting and wear on original old folds, with a few repairs on verso, two repaired tears into the lower right corner, a loss to the lower right margin just to the image, where extracted from the publication, [BM Satires 11940], 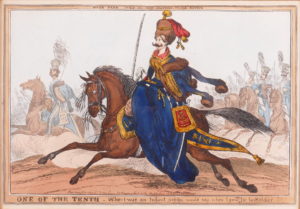 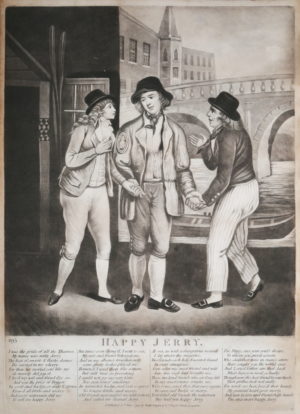 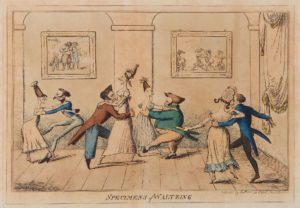 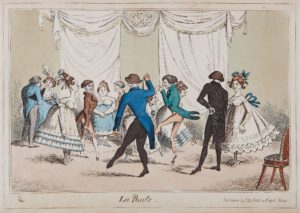