A New & Exact Survey of the River Dee or Chester-water,

inverted map of the Wirral peninsula with the Mersey and Dee estuaries to either side, from ‘Great Britain’s Coastal Pilot’, with parts of the coast of Lancashire, Cheshire and Flintshire, Chester in the upper left corner, the noticeably smaller city of Liverpool lower left, a compass rose lower centre with north pointing below, ships and rhum lines, a large decorative title cartouche in the upper right corner, dedicated to King William III, set against a vignette with pastoral figures of ditch-diggers and a dairy maid, in the foreground a longboat rowed by crowned figures with shields, possibly representing the exile of St Mungo from Glasgow, who founded the monastery where he discovered the sanctity of his young disciple, St Asaph, after whom the monastery and settlement became named, the eponymous tiny city identified on this chart just below this scene, finally, two putti suspend a drapery text cartouche, upper centre, describing the depth of water at spring and neap tides, 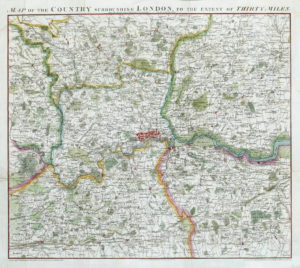 Map of the Country surrounding London to the extent of Thirty Miles,