the lower right quarter of Lewis’s large 4-sheet ‘A Map of England & Wales Divided into Counties, Parliamentary Divisions and Dioceses, Shewing the Principal Roads, Railways, Rivers & Canals, Projected from the Triangulation for the Survey made under the Direction of the honourable the Board of Ordnance’, this sheet bounded by the coast of Southeast England from the Wash to Poole Harbour, excepting north Norfolk, extending inland Northwest to Birmingham and Litchfield in Warwickshire and Staffordshire, London lower centre, also including a section of the coast of France, the lower right sheet corner containing tables of the Extent of the Several Dioceses, divided into the Dioceses of the Province of Canterbury and the Dioceses of the Province of York, decorated with the coat-of-arms of each diocese, [Andrews's Accurate Map of the Country... round London], Sheet 15, 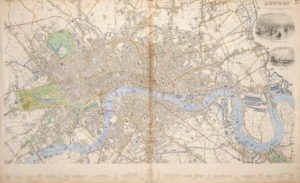 The River of Thames from London to the Buoy of ye Noure,