ovoid world map surrounded by 12 wind-heads, from the second woodblock, bearing the printmaker, David Kandel’s, initials in the lower left corner, all in a border of clouds, prepared for the ‘Cosmographia’, which first appeared in 1550, a revision from Munster’s first world map that appeared in the ‘Geographia’ from 1540, in this later version North America is called ‘Terra Florida’ and is almost bisected by a Hudson Bay of exaggerated depth, other geographical anomalies are the large island west of the Indian sub-continent named ‘Taprobana’, normally labelling Sri Lanka, here named ‘Java’ instead, the sources of the Blue Nile and the White Nile sited in Southern Africa, a recently discovered, therefore speculatively outlined and unnamed, landmass south of the Magellan Straits, and early reference to the Pacific Ocean, with Magellan’s ship sailing just above, and 8 sea monsters of various sizes, 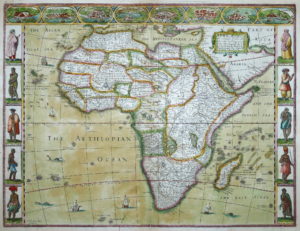 Africæ, described the manners of their Habits and buildinge, newly done into English by J.S., 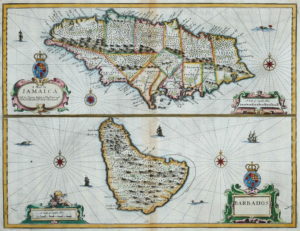 A Map of Jamaica [on sheet with] Barbados 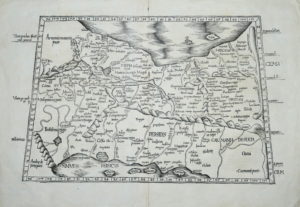