plate 6 from ‘Coloured Views of the Liverpool and Manchester Railway’, originally published as 6 plates to commemorate the railway’s opening, but soon expanded to 13, such was the popularity George Stephenson’s feat of engineering, a reflection of the excitement at the brightening dawn of this new era of transportation, as the second significant railway to open after the Stockton to Darlington line, responding to increasing commercial and industrial demands for the more rapid movement of goods and materials, and being the first to be powered entirely by steam locomotives, apart from the short and steep incline through Wapping Tunnel between Edge-Hill and Liverpool Docks, where a cable system was deployed, this scene depicting the line approaching central Manchester, 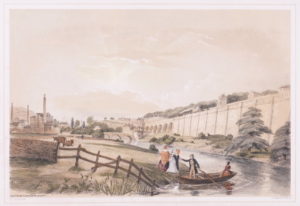 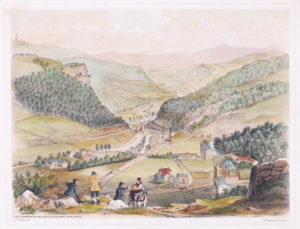 The Todmorden Valley, from above Mytholm Church, 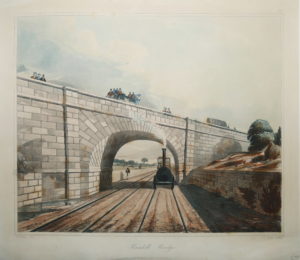