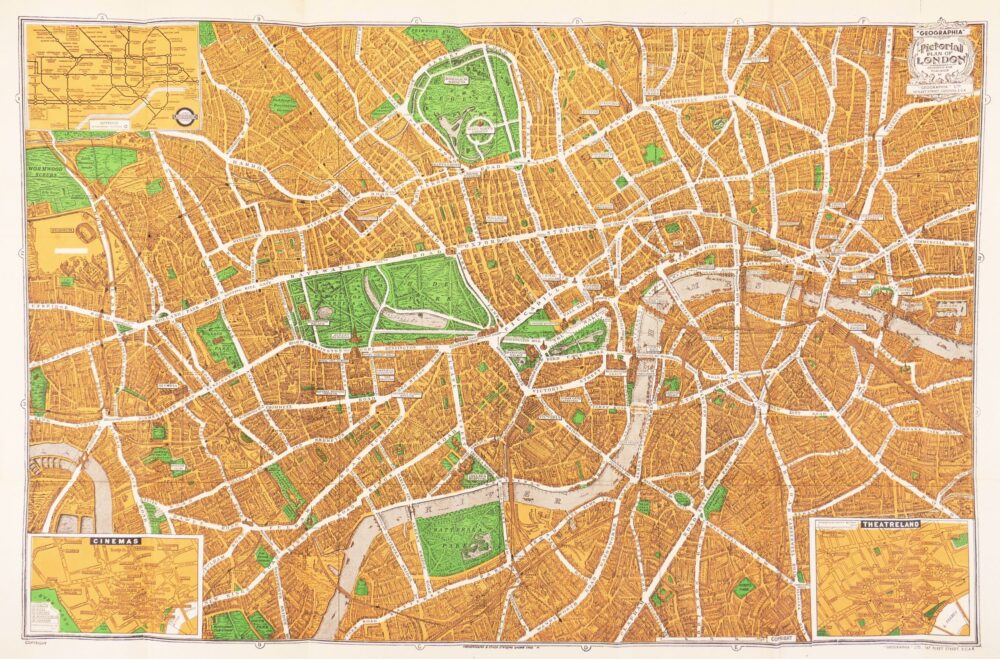 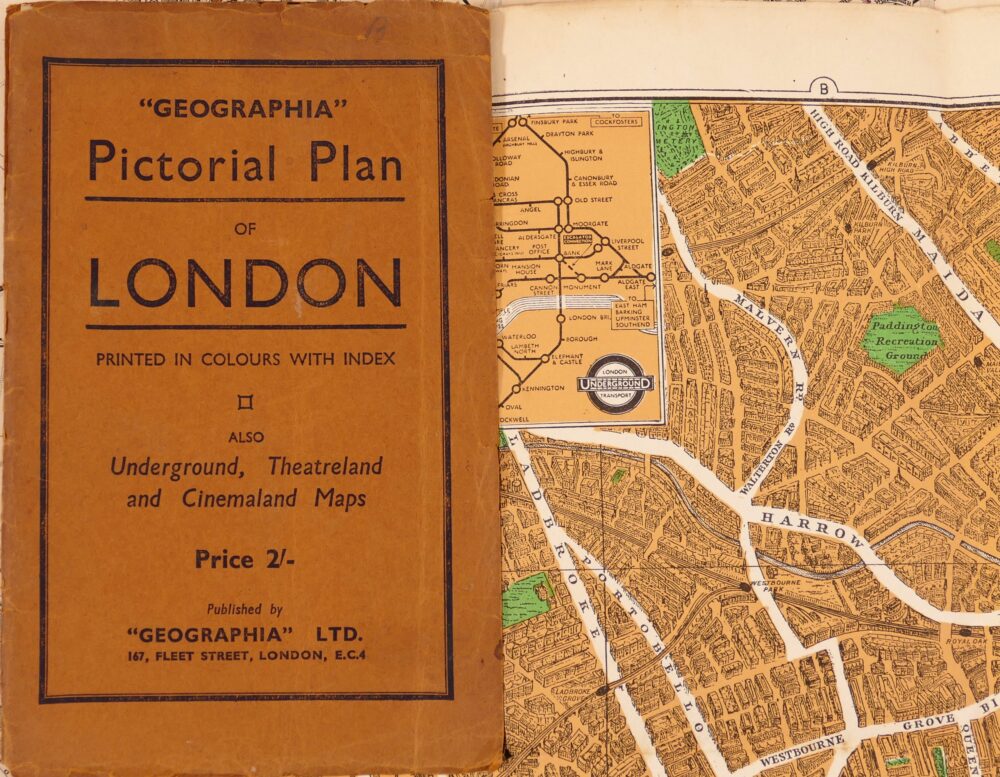 bird’s-eye, folding, pocket plan of London, extending from Primrose Hill to Wandsworth and from Ravenscourt Park in Hammersmith to London Docks, with stylised buildings, trees in parks and gardens, railways and viaducts, the more prominent public buildings enlarged and labelled, and the major roads picked out in white and named. The title cartouche is in the upper right corner, and an inset plan of the Underground in the upper, while the lower right corner displays an inset plan of Theatreland, predominently Soho, Charing Cross and St James’s. But it’s the inset plan of Cinemas, in the lower left corner, that is particularly redolent of the era, upon which the Second World War’s physical impact on London was to take such a toll, decades before the social and technological changes more usually associated with the demise of this hugely important form of entertainment. Amongst the numerous, and so diverse, names are the Polytechnic in Upper Regent Street, originally the theatre of the Royal Polythechnic Institute, which became the birthplace of cinema in the UK when the Lumière brothers demonstrated their ‘Cinematographe’ in 1896, but changed it’s named after a brief wartime closure and transfer of ownership to Cameo theatres in 1940; the Stoll in Kingsway, first opened by the German-American impresario, Oscar Hammerstein I, as the London Opera House in 1911, but taken over by Oswald Stoll and operated as a cinema from 1917 to 1940; the Bloomsbury Super in Theobolds Road, which also ran from 1921 to 1940; and many others of varied longevity, but all now long gone, such as the Monseigneur on Piccadilly, the Sphere on Tottenham Court Road, and the Marble Arch Pavilion, 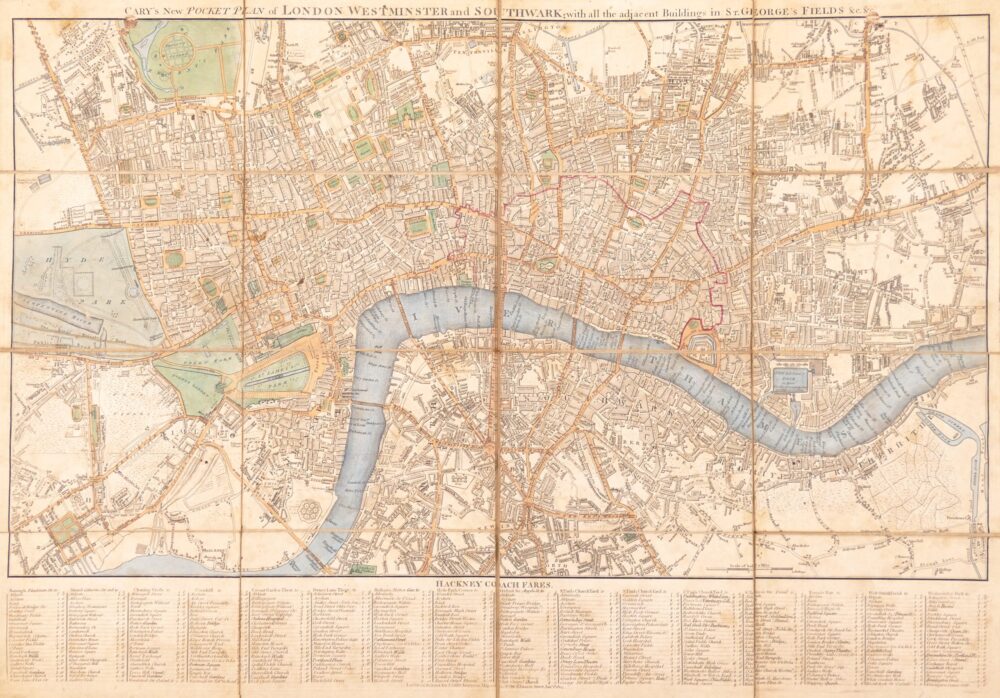 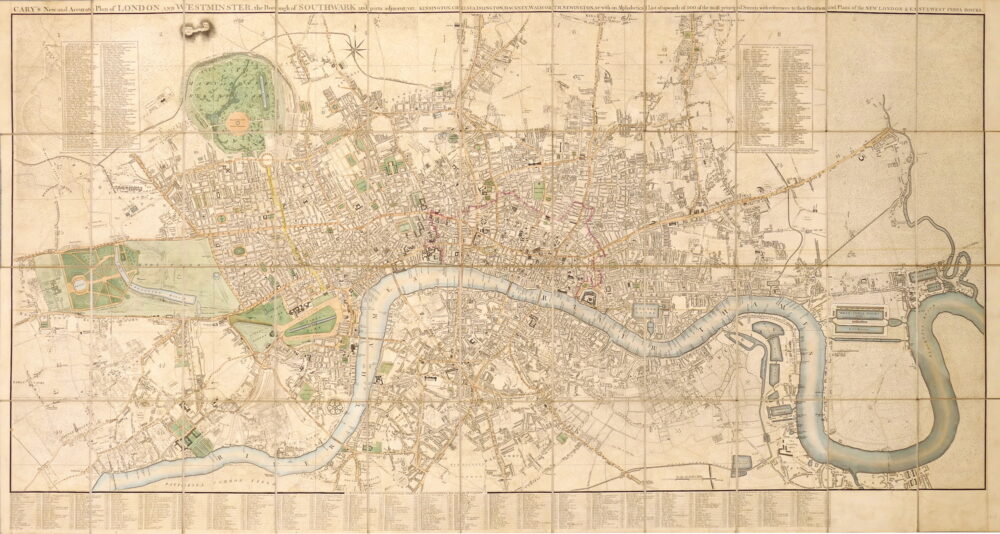 Cary's New and Accurate Plan of London and Westminster, the Borough of Southwark, and parts adjacent; viz. Kensington, Chelsea, Islington, Hackney, Walworth, Newington &c. with an Alphabetical list of upwards of 500 of the most principal Streets with references to their Situation and Plans 0f the New London & East & West India Docks,