Plan of the City of Washington,

scarce early plan of Washington D.C. from the Scottish publication, engraved in Edinburgh by Thomas Clerk for the second issue of the first edition of ‘Encyclopaedia Perthensis, or Universal Dictionary’, it is derived from the 1792 plan by Andrew Ellicott commissioned by Secretary of State Thomas Jefferson, to show the development of the new national capitol, agreed by Congress and announced by President George Washington in 1791, in the newly declared Territory of Columbia, as defined in this plan despite already being re-designated the District of Columbia in 1801, and it names the distinctive diagonal avenues intersecting the grid pattern of streets, also naming the Capitol, the President’s House, and George Town, all forming an approximately diamond shaped conurbation in the terrain between the ‘Potomak’ (Potomac) and ‘Eastern Branch’ (Anacostia) rivers, a simple lozenge title cartouche sits to the lower left, with a large compass rose to the upper right,

engraved plan with hand-colouring, 220 x 275 mm. (8 3/4 x 10 3/4 in), old vertical folds, unevenly trimmed on or just within the left plate mark but outside the printed area, a repaired tear in the right margin, minor handling creases and slight surface dirt, 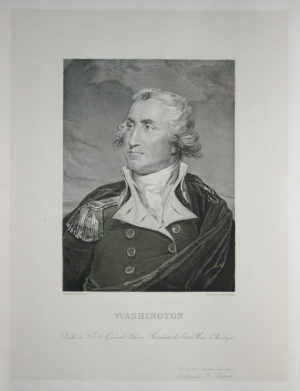 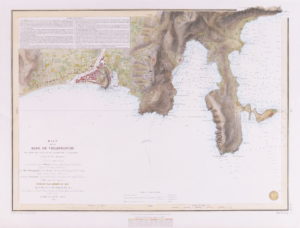 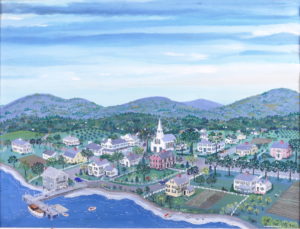