Yarmouth and the Sands about it,

North Sea coastal chart of part of East Anglia, straddling the border of Norfolk and Suffolk, from ‘Great Britain’s Coastal Pilot’, with north oriented to the left, extending from just north of Eckles (Eccles-on-Sea), including Waxham, Winterton Nesse, Hemsbey, Castor (Caister-on-Sea), (Great) Yarmouth, Corton, Lastiffe (Lowestoft), to Pakefield in the south, with a large title and dedication cartouche to Henry, Duke of Norfolk, lower right, supported by inshore fishermen in small boats, their oars and hooks arranged as trophies, the cartouche garlanded round by nets full of fish held by a merman and mermaid surmounting it either side of the coat of arms of the Duke’s house of Howard, a compass rose upper right, sandbanks and rhum lines,

Sussex Described and divided into Rapes, 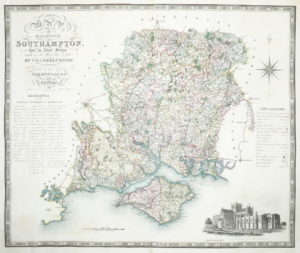 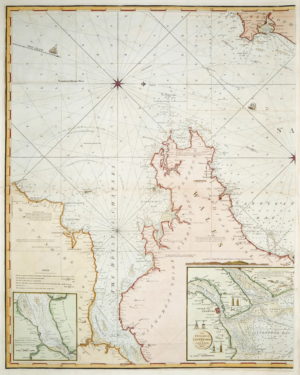 A New and Correct Chart of St. George's Channel,